Mark Tredinnick has just won the Montreal Poetry Prize for his fine poem Walking Underwater. This is a big, big deal. He receives fifty grand for that piece. As we've talked about the business of crafting memorable verse, been birding together in the Southern Highlands and commented on one another's poetry, I called and congratulated him. He'd had a busy morning on the phone (poet laureates saying well done!) and was a little dumbstruck that he'd won. We ended our brief conversation talking about the beauty of Nankeen Night Herons (Mark has had a few of them on his property of late), as Aussie poets worth their salt (and pepper) must always do.
LJ, December 16 2011.
Posted by Lorne Johnson at 6:24 PM No comments: 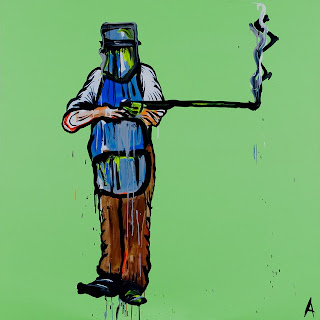 I called in to Adam Cullen's latest exhibition Aiding the Bet (with animals) at Gallery Ecosse, Exeter, on Saturday arvo (the above image isn't featured in the show).
Charles Waterstreet (clad from head-to-toe in black, imposing, & looking a lot like what Michael Hutchence may have turned into), friend of Adam's and also his legal backbone, launched the exhibition. He said, astutely, that the life of the Australian artist (whether writer, photographer or painter), is akin to travelling a 'broken highway'. Adam, though dapper in earthy-coloured threads, looked like a man shaken daily by the darkness. He walked sluggishly, failed to smile. Apparently, he takes much medication per day and has been recently diagnosed with bipolar disorder.
His work, though it can leap off the wall and dance with you, polarised me. I wouldn't have it on my walls, it's too boisterous. One painting, depicting a Tasmanian Devil with seemingly bleeding eyes and face, stirred me, considering how the animals are being battered by facial tumour disease.
Back in July, Cullen was in trouble with the law for firearms possession and driving whilst under the influence. A Taser, shotguns and rifles were among the weapons confiscated. He'd been blowing up TVs and spray cans whilst creating fresh art close to Goulburn. He received a 10 month suspended jail sentence. His arsenal has been destroyed.
I guess we'd say he's a colourful chap.
LJ, December 14 2011.
Posted by Lorne Johnson at 3:27 PM No comments:

THE TREE OF LIFE 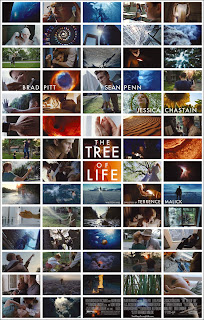 As I type this, I'm re-watching the humbling universe-meets-everything else sequence in Terrence Malick's bloated, ambiguous, glorious, dazzling and profound The Tree of Life.
I meant to watch the film in the cinemas, but life stopped me from getting there. I caught up with it last night. It is one of the most gorgeous and meaningful movies I have ever sat down with. Many have struggled with it. Some have hated it. Reading the audience reviews over at the Rotten Tomatoes website, reveals how polarising Malicks's opus is. So many people said they didn't get it and didn't have the patience to get it.
I thought the overall message was obvious, really (he said arrogantly): pay attention to life, salute the glory that encompasses you at every moment, always have everything in perspective, walk fearlessly and end every day with a considered act of forgiveness or mercy.
There's a poignant moment where a velociraptor-like dinosaur approaches another that is dying on riverstones. The healthier dinosaur places its foot on the sick dinosaur's head, but spares its life. This vignette got to me more than any of Spielberg and co's epic dino films or TV series. There's another sublime moment where Brad Pitt's rigid, cantankerous, discipline-obsessed father hugs his eldest son after much belittling and tells him he is a 'sweet boy'.
There's so much cinematic pap out there that gets financed. Thank god for Terrence Malick's vision and poetry. He reminds us to pay attention to every aspect of this torrid, confused, horrifying life and liberate ourselves from all that scares and harms us... and to keep reaching for the 'beautiful light', like Jim Caviezel's restless soldier in Malick's other gem The Thin Red Line.
LJ, December 9 2011
Posted by Lorne Johnson at 6:16 PM No comments: 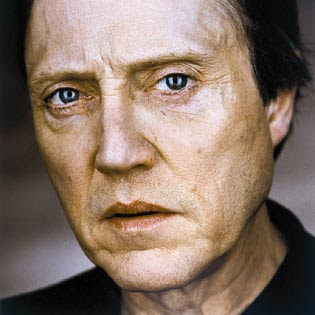 WALKEN
Clad in threads as dark
as all the world's rooks,
with Dover scarp skin,
he lurked outside
the Lowenbrau Bierhall
one night in two-thousand.
I applauded his
considered embodiment
of The King of New York;
he rasped something akin
to gratitude, or disgust,
gave me nothing else.
Al least, he could've
smiled, laughed, hissed
like Sleepy Hollow's Hessian,
shot me in the bloody neck
with his weapon of choice.
LJ, December 2 2011.
Posted by Lorne Johnson at 6:14 PM No comments: