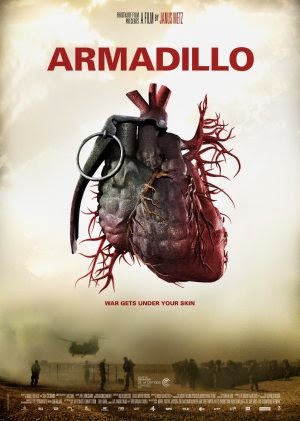 Still seduced by all things Scandinavian, I recently watched Armadillo, a Danish documentary on Danes fighting in Afghanistan. It was engaging, confronting. It made me question why the hell the west was/is over there. That big question isn't tackled in this documentary. Perhaps it's too big a question to ask - for the answer is too much to swallow or too infuriating or too overwhelming. How does one best come to grips with American imperialism and its ripples?

In Armadillo we watch Danish soldiers defend their compound (Armadillo), complete routine patrols, engage in firefights, follow up on drone intelligence, hang out, admit they're bored, talk to family back home via sat phones, tease one another, meet locals whose animals and homes they've destroyed, talk about compensating locals whose animals and homes they've destroyed, execute members of the Taliban, then be awarded for executing these members of the Taliban. We feel the soldiers' pain when one of theirs is killed. Somehow, we feel for the Taliban - still human beings - when they're brought down by heavy fire from automatic weapons, then dragged from ditches. We get the impression from the local Afghan men who speak that any western intervention will do nothing.

A couple of years ago, I spoke to a retired army colonel who said Australian forces didn't need to be in Afghanistan. What were the numbers? 40 dead? 260 seriously wounded? And so many with mental trauma. What a disgrace. I'm sure a lot of good work was done over there, but what have been the major consequences of our involvement? What great good has come of it?

So what will be the west's next great mission? Who will be the next target? Will we soon have US, British, Australian and Danish soldiers fighting in Russia or Iran? America seems to be itching for conflicts there. I feel for the thousands of vulnerable people who will one day suffer from the west's might. We need to do what we can to fight for these precious souls.

As a final side note, a hard-working student of mine recently left school to join our armed forces. I hope his journey is a safe one.